Return to About Us

A little history about us…

The first library in Plains was opened in the back of a Dry Goods Store in 1932.  The library was open from the summer of 1932 to September 1935, one or two days a week.  Helen Willmett, a young woman from Plains, worked there through the National Youth Administration for youth of low income families.  This program was started by Eleanor Roosevelt, wife of President Franklin Roosevelt.

Books were given to the library by the Lone Star School, which had closed; and books were rented by the trunk, which consisted of 50 books, usually 10 best-sellers.  These books were rented from the Topeka Traveling Library.  To pay for expenses, customers paid 10¢ each to read the best sellers.

The library closed when the young woman reached the age of 21, and was no longer eligible to run it.  This same young woman continued to be a very big advocate and supporter of the library into her 90’s.

In 1968, the dream of a man who enjoyed reading and wanted to encourage others, especially children, to read, began working on getting a library for Plains.  He learned about the recently organized Southwest Kansas Library System.  At that time he was on the local school board and discussed the possibility of a library for Plains with the board members.  They gave him permission to use a classroom in the old high school building if he could find a librarian.  He did! And with the help of the community donating a typewriter, shelves and some bricks and boards, in February 1969 they were ready for business!

In 1987, the library formed as a district library following a successful election on the question of establishing a legal library.  In 1992, the building at 500 Grand Ave. was purchased and completely remodeled. Extra lots for expansion were also purchased at that time. Over the 45 years that the library has been in operation, there have only been four library Directors – the first was Pauline Giesinger from 1968 to 1992, the second was Carolyn Chase from 1992 to 2017 and the third is Jessica Collins from 2018 to 2019, the fourth is Sara Munn 2020 to present.

The library received Community Service Tax Credits for 2009 and 2010, which allowed the Library to add an expansion that doubled its size. That building project started in 2011 and the community celebrated with a Grand Opening on April 22, 2012.

About Us Hours & Closings Library History Board of Trustees Policies Yearbooks 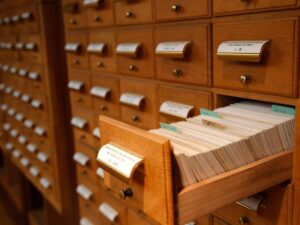